Why Using Examples of PMP Applications Can Get You Rejected 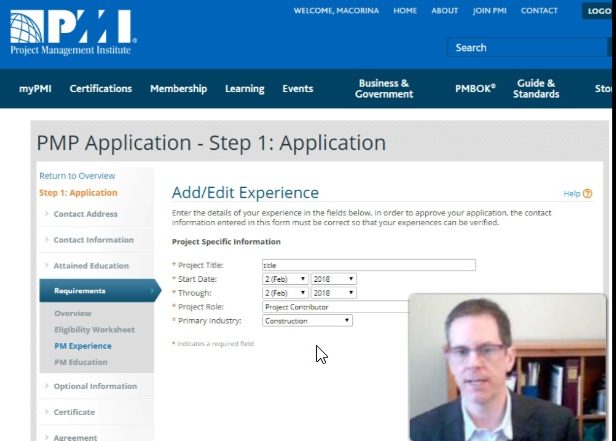 You might think it is a good idea to search for samples or examples of PMP applications before submitting one. But just like trying to craft a great resumé to land a job, what worked for another person probably won’t work for you. Wouldn’t it be better to learn from all the people who had their resumés or PMP applications rejected and avoid making the same mistakes, rather than trying to copy what one person got lucky with?

You may have seen examples of what to write in your PMP application description on the websites of PMP Exam Prep Instructors. They will suggest using things like:

IN: Created the Project Charter.

Of course, there are many PMP Education Providers out there that would like you to think that creating your PMP application is easy and if you just follow their template and use some words from PMBOK, you will be fine. That’s because they don’t have to help people get their PMP application accepted or deal with the headaches when someone has their PMP application rejected. In fact, our favorite PMP exam study company recently posted that failing the PMP audit is nothing to worry about and that some of their students have failed the audit multiple times! But you should worry if you follow their advice and you value your time and mental health.

Why this is a Bad Idea!

One of the big reasons there is so much bad advice on what to put in your PMP application is something called “survivorship bias”. From Wikipedia, “survivorship bias is the logical error of concentrating on the people or things that made it past some selection process and overlooking those that did not, typically because of their lack of visibility. This can lead to false conclusions in several different ways”.

Trying to mimic an existing PMP application example is a bad idea for several reasons:

You should know that the PMP application review process is designed to weed out poor quality applications. This includes applicants where the documented experience is vague, difficult to understand, plagiarized, or poorly written or where the project experience appears to be administrative or operational, among other problems.